The need for designing unique structures occurring increasingly due to the high investment attractiveness of the Krasnodar territory and the development of a resort infrastructure. In cases of such design customers turn to the scientists who own narrow knowledge in the field not normalized calculations and have experience of unusual design.

Recently we participated in the development of design solutions for buildings which belong to the class of unique. When such projects are considered a final technical solution is produced only after the formation of consensus in the process of discussion of the problem by specialists. 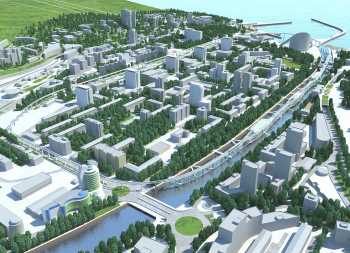 This object rightly refers to unique structures and from an architectural and technical point of view. The leisure and entertainment gallery is designed to unload the central districts of Sochi and to facilitate the access of citizens to urban infrastructure facilities.

For the Russian Federation this is the most significant project which is intended to demonstrate the social and cultural level of our country during the XXII Winter Olympic Games in 2014 to the entire world community. Therefore, all details of the project are developed with special care. GEOTECH specialists carry out scientific and technical assistance in the development of geotechnical and structural sections of the project for the Olympic Village infrastructure. 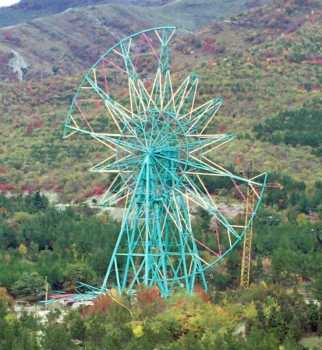 The Ferris wheel with a diameter of 75m in Gelendzhik

In order to align the settlements of a structure lockated on the base with uneven compressibility of soils, rigid foundations are necessary. Thin plates bend, following the displacement, and thick ones have a large own weight. Studies in the field of «ribbing» of slabs show the way of creating effective structures. However, for the device of upwards directed edges a formwork is necessary. Such diafragms make it difficult to use the volume of rooms. In clay soils, capable of holding vertical trench walls, it is more efficient to arrange slabs with diafragms directed downward. The system of such diafragms combined with a relatively thin plate will allow to obtain a plate foundation whose rigidity will be adjusted taking into account the distribution of loads and the compliance of the base, the frequency and the configuration of the ribs. For many structures, the unevenness of the deformation of the base is caused by the nature of the load and its distribution. 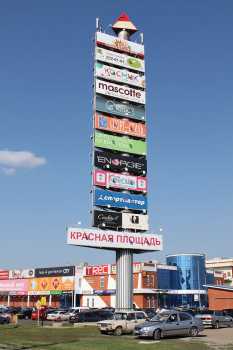 Calculation of high core structures: chimneys, advertising racks, navigation towers - requires special attention when taking into account wind pulsation loads, causing the loss of stability of such metal structures.
When calculating the advertising stela with a design height of 35 meters, we were faced with the fact that the lower support section delivered to the site, the thickness of the wall according to the project was 16 mm, in fact it turned out to be 12 mm. The section was already assembled, and our specialists needed to find a solution to avoid dismantling the metal structure. In connection with the identified non-compliance, it was decided to strengthen the cross-section of the rack by introducing longitudinal ribs in the form of I-beams with a section height of 120 mm.